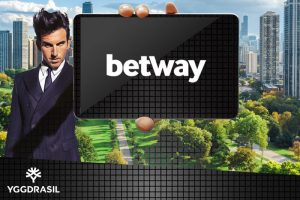 Online casino content maker and publisher Yggdrasil is set to significantly expand the exposure of its content thanks to a recent partnership with international online gaming and sports betting operator Betway.

As part of the deal, Yggdrasil will supply its complete portfolio of offering to the major digital gambling firm in several regulated markets, including the UK and Germany, which recently opened its market for online casino activities.

The deal covers both proprietary content produced by Yggdrasil as well as games from third-party studios via the YG Masters program. In addition, titles equipped with the studio’s Game Engagement Mechanics will also become available to Betway and its large and constantly growing player community.

Betway is one of the industry’s largest operators with presence in multiple markets. The iGaming and wagering brand is a sponsor of several global sports organizations, including Premier League club West Ham United, as well as of numerous sporting and racing events.

Yggdrasil is the latest content supplier to partner with Betway and provide the operator with access to its products. Earlier this year, the iGaming brand announced a similar partnership with Sydney-based studio Lightning Box, which is now part of the larger Scientific Games gambling technology group.

Of nabbing Betway as their latest operator partner, Yggdrasil Director of Commercial Operations Andrew Pegler said that they are delighted to be partnering with such a “hugely recognizable brand” across a number of regulated markets.

He went on to note that their library of engaging slots offers a highly immersive experience and that they are confident their products will resonate well with Betway’s players.

Mr. Pegler also pointed out that Yggdrasil is in an exciting period of expanding its foothold with top-tier international and local operators and that they are looking at the same time to cement their business strategy to work closely with their partners’ growth ambitions in key regulated territories.

As part of its effort to expand its regulated presence, Yggdrasil has recently announced that it has been licensed to provide its products in Greece’s iGaming market. The company not long ago also expanded into Slovakia thanks to an existing partnership with online gambling operator Tipsport.

Commenting on their partnership with Yggdrasil, Betway Marketing and Operations Director Paul Adkins said that the provider’s products have “long stood out in the market for their impressive and engaging designs” and that they are delighted to now be able to offer them to their players.

Mr. Adkins further noted that with a “comprehensive roadmap of exciting games, features, and tools”, they are extremely excited about this newly penned partnership and look forward to working closely with Yggdrasil.