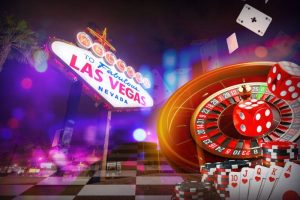 The southwest Las Vegas Valley in Clark County is experiencing rapid and sustained growth. Now, the Clark County Commission has approved plans for Stations Casinos to construct two hotel towers with over 450 rooms, entertainment venues and restaurants, as well as a casino of about 93,000 square feet – all on 50 acres of a 72-acre plot with water features.According to documents obtained from the county, the project would break ground in early 2022 and be completed in two roughly equal stages with Phase I opening by year’s end.Other large developments in the immediate vicinity include a $400 million Matter RE Group mixed use development called UnCommons across Durango Drive from the proposed casino resort. That under-construction development includes half a million square feet of office space, dining establishments, fitness centers and more than 800 residential units.Within a few miles, another development is also under construction on a 42-acre plot with 1,300 apartments and a quarter million square feet of commercial space. The cost of that project, Evora, is estimated to be about half a billion dollars.

The site has been approved for a new casino for almost a quarter of a century so zoning permissions were not too difficult to obtain. One of the issues the council addressed was the extensive use of water features on the properties, but it was found developers planned to use less than half the allotted 13,283 square feet to install 5 low-use water features such as cascading steps and planters. None of the features would be taller than 36 inches.Durango, a Station Casinos Resorts will be located about 15 minutes by car from the Las Vegas Strip, off the I-215 freeway. The location fits in with most of the other Stations casinos that cater to the locals market rather than inbound tourists. Stations Casinos is ultimately owned by Red Rock Resorts which has about a dozen casinos in the area including the Red Rocks Resort in Summerlin and Palms, which is located off-Strip across from the Rio. At least three of the company’s casinos have yet to reopen after gambling establishments in the state were shut down in 2020.