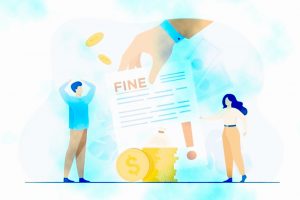 PokerStars has once again been slapped with a fine from the New Jersey Division of Gaming Enforcement (DGE) after a technical glitch on its platform enabled a self-excluded customer to gamble more than $500,000 with the online gambling operator.

According to a Notice of Violation sent by the DGE to PokerStars’ parent organization, The Stars Group, in late January, the regulator has imposed a $1,000 civil penalty on the business for failing to prevent two self-excluded gamblers from accessing its New Jersey site.

Only one of the two customers actually gambled. The incident happened back in 2019.

The gambler who staked money with the operator requested a six-month cool-down period in September 2018. In February 2019, he requested to be self-excluded entirely from the online poker and casino site.

In July of that year, he reached out to customer support and asked to be granted access to his account. The PokerStars team reactivated the player’s account because the originally requested six-month cool-down period had expired. A technical glitch on the platform had failed to place a self-ban flag on the account, which made it possible for him to play again.

PokerStars and its parent organization generated a little over $16,000 in profit from that player, according to the DGE Notice of Violation.

As mentioned above, the online gambling operator was ordered to pay a fine of $1,000 for its failure to prevent self-excluded customers from reactivating their accounts. The New Jersey regulator also told PokerStars to disgorge its $16,000-plus profit.

PokerStars’ parent, which is now part of Irish gambling giant Flutter Entertainment, informed the DGE about the incident in May 2020. It had frozen the player’s account by that time.

The operator explained that it detected the technical issue during an audit of its player database. It uncovered that the player in question opted to self-exclude on the day the site was upgrading its software. After a failed upgrade attempt, the player was not flagged properly as one that has chosen to self-exclude from gambling on the site.

This is not the first time the operator has been fined by the local regulator. In 2017, it was imposed a $25,000 fine for failing to prevent out-of-state players from gambling on its New Jersey site. In 2019, The Stars Group was fined $10,000 for taking bets on prohibited sporting events.