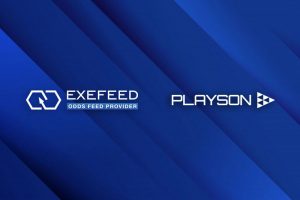 Malta-based online casino games developer Playson has teamed up with Serbian provider of B2B gambling services ExeFeed to equip it with its portfolio of content.

Under the recently penned deal, Playson will provide its newest partner with access to its fast-growing collection of online casino games, including popular titles such as Book of Gold 2: Double Hit, Wolf Power: Hold and Win, and Legend of Cleopatra Megaways, among others.

ExeFeed will integrate the range and launch it across a number of its operator brands, including Serbia-facing BetOle, Germany-focused NXBet, and Montenegro-facing LobBet. This new partnership will thus significantly strengthen Playson’s reach across multiple European markets.

Headquartered in Malta, the studio has established itself as a leading provider of content for the online gaming industry. Its library of 75 omni-channel games is available in more than 17 regulated markets. Aside from Malta, the studio has staff in Ukraine, the UK, Romania, Spain, Hungary, and Greece. It is licensed by the UK Gambling Commission, the Malta Gaming Authority, and the Romanian National Gambling Office (ONJN).

As for ExeFeed, it is based in the Serbian capital, Belgrade, and specializes in odds calculation as well as in the development of software for the online sports betting industry. As mentioned above, the company powers several online wagering brands in its home country as well as in other markets in the region.

Of their latest major partnership, Playson Sales Director Blanka Homor said that through its premium portfolio of online sports betting and casino brands, ExeFeed has built an “impressive following in a string of regulated markets” and that they cannot wait to see how its players will receive the studio’s games.

Ms. Homor went on to say that her company has “reached a succession of important milestones in 2021” and that they look forward to maintain that momentum in the months to come.

Late last month, Playson expanded its footprint in another important regulated market through a partnership with a leading locally licensed operator. The company teamed up with MaxBet.ro to further cement its presence in the lucrative Romanian iGaming space.

Of their partnership with Playson, ExeFeed Sales Manager Milica Popovic said that the studio’s games have become even more exciting over the course of the past year so forming this alliance is “a very strong move for both parties.”

She added that players registered with their online casino brands have become accustomed to a high standard of entertainment and playing experience and that deals such as the one with Playson enable them to continue to meet the ambitious objectives they have set before themselves.