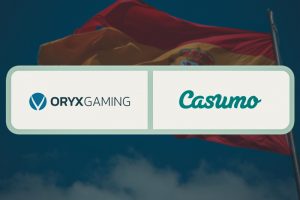 Casumo is the second Spain-facing online casino to go live with ORYX’s exclusive RGS content. Titles from multiple studios that work with the provider, including GAMOMAT, are now available to the popular iGaming brand’s Spanish players.

GAMOMAT is a familiar name in the local gaming space as its products are among the most popular content across Spain’s land-based gambling establishments. As part of this recent deal between Casumo and ORYX, the online casino’s registered users can now play GAMOMAT player favorites such as Red Hot Firepot, La Dolce Vita, and Books & Bulls, among a number of other gaming titles.

Spain is one of Europe’s fastest growing regulated online gambling markets. iGaming was legalized in the country in 2011, but the activity really took off a few years later when online slots were permitted. Thanks to that major boost as well as the overall surge of online casino in the past year, the vertical now accounts for nearly 40% of Spain’s gross gaming revenue.

ORYX has been able to provide its products in the local market since the summer of 2018 when it was certified by the Spanish gambling regulator, DGOJ.

Commenting on their launch with Casumo, ORYX Managing Director Matevz Mazij said that expanding into new markets forms a big part of their strategic plan for continued growth and that they are thrilled to be able to strengthen their Spanish footprint with Casumo.

Mr. Mazij also noted that the online casino operator is the perfect partner for them as it has quickly established itself as a “fun and entertaining” brand following its launch in 2012. According to the ORYX boss, this recent partnership will also pave the way for further deals in the Spanish iGaming market.

Casumo obtained a license to operate in the Spanish gambling space in July 2020 after the local regulator conducted a third tender process. The operator joined a list of nearly 80 betting and gaming companies that are now licensed and operate in the nation.

It should also be noted that Spain is not the only market ORYX has recently expanded its presence in. Last month, the company unveiled two partnerships that secured it with entry and further expansion into the Swiss iGaming space. It first teamed up with Grand Casino Luzern and then secured a similar deal with Grand Casino Baden to provide its content to the two operators’ iGaming units.