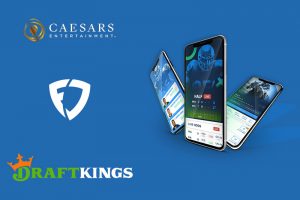 After patiently waiting to see how the US sports betting frenzy will unfold, the National Football League has finally made its first foray into legal athletic gambling with three exclusive partnerships with major sportsbook operators.

The NFL announced Thursday that Caesars Entertainment, Inc., DraftKings, and FanDuel have all become its Official Sports Betting Partners.

All three companies have signed multi-year agreements with the American football league and as part of these deals, they will have the exclusive right to make use of NFL media and logos at their retail and online sportsbooks across states where sports betting is permitted. The operators will also be able to engage with football fans through NFL-themed free-to-play games.

Additionally, Caesars, DraftKings, and FanDuel will all be able to use NFL’s official data feed. The three sports betting operators will further have the right to integrate sports betting content directly into NFL’s media brands, including the league’s official website, NFL.com, and mobile app.

As part of the three recent agreements, the gambling companies have committed to helping NFL protect the integrity of American football and its fans. The league’s first Official Sports Betting Partners have all agreed to adhere to the NFL’s integrity policies and to collaborate with it on “intelligence sharing advocacy efforts, and responsible gaming education.”

Financial details about the deals were not revealed, but according to a person familiar with the matter, they were worth nearly $1 billion over a five-year period.

It should be noted that Caesars’ deal with the NFL represents an extension of their previous relationship. The casino powerhouse became the league’s Official Casino Partner in early 2019. Additionally, later that year DraftKings was named the NFL’s Official DFS Partner.

Of venturing into the world of sports betting, Renie Anderson, Chief Revenue Officer and Executive Vice President of NFL Partnerships, said that as the US sports betting landscape has continued to evolve, “we have been thoughtful with our strategy and are excited to announce three partners who share the NFL’s vision and goals.”

The football league was one of the biggest opponents of legal sports betting in the US. In 2012, the NFL and the nation’s other big sports leagues sued New Jersey to halt athletic gambling as the practice “would irreparably harm amateur and professional sports by fostering suspicion that individual players and final scores of games may have been influenced by factors other than honest athletic competition.”

The legal case was tabled before the US Supreme Court, which in May 2018 issued its landmark ruling in favor of New Jersey that paved the way for the legalization of sports betting across US states.

Asked about their new thinking on the topic, Ms. Anderson told the Financial Times that that evolution was prompted by the “evolution of all things consumer, of all things fans are doing and how their behavior is evolving.”

Over the past ten days, Arizona became the 27th state to legalize sports gambling, while New York became the nation’s most popular state to embrace mobile betting.