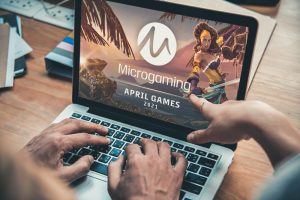 A new month means a new selection of online casino games from Microgaming and its network of creative studio partners.

And the provider’s April selection of new titles is pretty hefty and rich in themes. Fans of Microgaming’s content will be swept into pirate adventures, some gothic horror, Arthurian escapades, and a journey back to Ancient Egypt, among others. Firepots, jackpots, blazing wheels, expanding reels, free spins, Super Spins, respins, and a plethora of other features will be awaiting players of all taste and experience level.

First off, Microgaming partner All41 Studios debuted on April 6 its gold mining-themed online slot Gold Collector that stars the HyperHold feature. The exciting feature offers players the chance to win one of five different jackpots. During HyperHold mode, landing a gold coin on a reel locks it in place and respins are reset to three. The more gold coin positions the player fills, the bigger their prizes are.

Next to go live is Queen of Alexandria WowPot from Neon Valley Studios. The game will be launched on April 13 to transport players all the way back to when Cleopatra reigned as Queen of Egypt. In this thrilling new slot, players can trigger Microgaming’s WowPot Bonus Wheel feature and when this happens they are guaranteed to scoop one of four jackpot prizes with the top one seeding at €2 million.

Off to April 20, Just For The Win’s Book of King Arthur will offer players the opportunity to join King Arthur in his quest to explore the Avalon riches. Expanding wilds, boosters, and a Round Table jackpot wheel are among the features coming with this new game.

A new title is set to join Microgaming’s fast-expanding Megaways range. 8 Golden Skulls of Holly Roger Megaways is set to be launched on April 22. It was crafted by Buck Stakes Entertainment, the latest addition to the provider’s network of independent studios.

The pirate-themed slot is equipped with Big Time Gaming’s Megaways mechanic to randomly produce between 64 and 117,649 winways with every new spin. In addition, players are offered the chance to win up to 1,900 times their stake with the Firepot jackpot scatter feature. A mystery symbol feature, Rolling Reels, free spins, and a multiplier bonus will also be part of the special experiences offered by this online slot.

SpinPlay Games is set to debut its 9 Blazing Diamonds gemstone-themed title on April 27. Fiery precious stones cascade down the reels, with the above-mentioned blazing diamonds being among them. When three or more of these appear in view, they activate the Blazing Wheel which offers players the chance to win instant cash prizes or free spins. Both of these also come with a multiplier of up to x4.

Snowborn Games is set to present its own Ancient Egypt-themed game on April 29. The title, Egyptian Tombs, gives players a tour around ancient tombs where they can bump into pretty much everyone from Cleopatra to the sun god Ra while scouting for riches.

Three Scarab symbols activate the Tomb Bonus feature where players spin the Wheel of Fortune for between 8 and 50 free spins. A Super Spins feature is randomly triggered to add extra symbols on the reels and turn Ra symbols into Wilds.

Notable mentions in Microgaming’s April list of new games include Anna Van Helsing Monster Huntress, Fu88, Inferno Gladiator, and more. The provider will also present its latest poker product – Hold’Em Poker 2, on April 12. The game will come with a random prize-pool generator that is linked to a progressive jackpot.