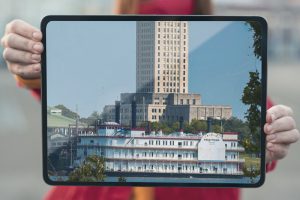 Hollywood Casino Baton Rouge this week filed an application with city and parish officials seeking permission to move expand its operations and relocate on dry land.

Owners of the riverboat facility first announced plans for its relocation and expansion last summer. The new casino complex is set to spread across 106,209 square feet and to include different non-gambling facilities, in addition to its existing gambling options.

Hollywood Casino is in the process of being acquired by Casino Queen Holding Company of Illinois in a $28.2 million deal announced in late 2020. The transaction is expected to close in the second half of the year, subject to approval from Louisiana gambling regulators.

As part of the relocation plan, Hollywood will expand its current dockside facility and transform the valet parking area into indoor space. The casino expects to spend between $21 million and $25 million on the scheme.

The riverboat’s existing 859 slot machines and 12 table games will be moved into what now serves as the gambling venue’s atrium. Owners said last year that they do not plan to add more gaming positions as they move off Hollywood onto dry land.

The facility’s relocation has long been under consideration. However, that was not possible until 2018 when Louisiana lawmakers passed a law that paved the way for the state’s riverboat casinos to move on dry land in a bid to reinvigorate the state’s stagnant gaming sector.

Hollywood Casino Could Add a Sportsbook

Plans include a new sports bar and entertainment area with seating for 250 people, a sports viewing area, and a Shaquille O’Neal Big Chicken Restaurant. The new restaurant will replace the casino’s existing Celebrity Grill.

The sports bar or the sports viewing area may also be turned into a sportsbook now as sports betting is legal in the state. Louisiana was one of several states where voters approved wagering in last November’s election.

Gov. John Bel Edwards this week signed into law a bill outlining the rules and regulations under which athletic gambling activities will be conducted in the state.

According to site plans previously filed with local regulators, the relocation of Hollywood Casino was expected to be finalized by February 2022, but that timeline is unlikely as construction was scheduled to kick off early in 2021.

The riverboat casino will remain operational until the relocation is complete. The project is set to create more than 160 construction jobs. Property officials have not been able to tell whether the relocated casino would generate new permanent jobs as the new facilities that would be added to the complex would basically replace old ones.