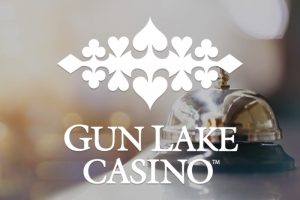 Gun Lake Casino in Wayland, Michigan on Monday unveiled a $300 million expansion project that will transform it into a full-scale hotel and casino resort.

Work on the planned expansion will kick off after a previously announced $100 million revamp wraps up in late summer.

The larger expansion project includes the addition of a four-diamond hotel with 250 rooms and suites, a three-meal restaurant, and a full-service spa. The casino, which is owned and operated by the Gun Lake Tribe (also known as the Match-E-Be-Nash-She-Wish Band of Pottawatomi Indians), also plans to add what would look like a year-round inland oasis that will include a pool enclosed in a glass dome, a hot tub, private cabanas, and nightlife entertainment concepts with live music, top-tier DJs, and dancing.

As mentioned above, Gun Lake Casino is currently in the middle of a $100 million expansion. It will add two new dining facilities and space for additional slot machines and table games. The gambling venue plans to add 450 new slot machines, 12 new table games, and a larger non-smoking area as part of its ongoing revamp. This earlier expansion project is slated to be completed late this summer.

The gambling venue launched its sports betting facility – Stage 131 Sprotsbook and Lounge – in the fall of 2020 as part of a partnership with Pennsylvania’s Parx Casino, which property officials struck in the spring of the same year.

Sal Semola, President and Chief Operating Officer of Gun Lake Casino, said that the project is the largest in the property’s 10-year history and that it will support the host community by generating more jobs and additional revenue.

Under Gun Lake Casino’s agreement with Michigan, surrounding cities and townships receive a portion of the casino’s revenue. The property’s contribution to the area has totaled $35 million over its decade of operation, according to the tribe.

And according to a report released by tribal authorities earlier this year, the gambling establishment located just off Exit 61 on US 131 has generated nearly $2.8 billion for the state’s economy since its launch in early 2011. The tribe said in that report that it has invested more than $415 million into upgrading and expanding the casino while also directly paying more than $500 million in wages.

Gun Lake Casino officials said Monday that the planned new amenities will occupy approximately 250,000 square feet of space between the existing casino building and US 131. Additional details about the ongoing expansions at the property will be released in the coming months.