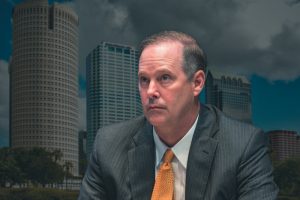 Florida lawmakers are set to consider next week a proposal spearheaded by Senate President Wilton Simpson that would create a new regulator to oversee the state’s gambling industry and would scrap a requirement that pari-mutuels must conduct live horse racing or jai alai to also offer card games.

Senate President Simpson announced earlier this week that a trio of bills authored by him would be considered by the Senate Regulated Industries Committee this coming Monday.

One of the measures calls for the creation of a five-member Gaming Control Commission that would be tasked with policing the way gambling activities are carried out across Florida.

In a memo, Mr. Simpson explained that the members of the regulatory body would be appointed by the Governor. Currently, the state’s gambling industry is overseen by the Department of Business and Professional Regulation and law enforcement officials.

The Florida Senate President also noted that appropriate regulatory controls should be implemented and reviewed and updated regularly as they “build public confidence and lead to a stronger gaming industry that can spur economic growth that benefits the businesses and our state.”

Mr. Simpson’s bills also contain a proposal for pari-mutuels that have harness racing, quarter-horse racing and jai alai to no longer be required to offer races and jai alai games in order to be able to operate poker games. The move has been discussed for years by state lawmakers and has been known as decoupling.

In 2018, state residents voted in favor of a proposed constitutional amendment that banned live greyhound racing at Florida’s dog tracks but allowed their owners to continue to offer card games. Tracks in the Miami-Dade and Broward counties were also allowed to continue to operate slot machines.

The state’s pari-mutuels have long been lobbying for decoupling, but opponents of the move have argued that being permitted to offer card games is a reward for the race tracks’ continued support for the state’s racing and jai alai industries.

Senate President Simpson noted in his memo that his measure, if passed, would not affect live thoroughbred racing as “thoroughbred breeders, owners, trainers, and permit holders believe keeping a live racing schedule is vital to their industry.”

There is no mention of sports betting in Mr. Simpson’s bills. He pointed out that gambling and the expansion of the state’s industry are thorny issues. It was in 2018 again when state voters approved an amendment, under which Florida residents now have the final say on all gambling-related legislative matters.

It should also be noted that talks about a new gambling compact with the Seminole Tribe are underway. Florida lawmakers and tribal leaders have been trying to reach a new agreement for nearly six years now, but to no avail.

The two parties have been bickering over the so-called designated player card games that pari-mutuels offer. The Seminoles argue that these type of games violate their exclusive rights over blackjack in the state. And they have been the reason for the tribe to stop making annual payments to the state in 2020 that totaled at least $350 million every year under the original gambling compact signed in 2010.

Senate President Simpson reached a deal with the Seminoles toward the end of the 2019 legislative session, but Gov. Ron DeSantis rejected it saying he needed more time to review and access its terms.

The state’s top official said last month it was highly unlikely that he would support a deal harming Florida’s pari-mutuels, that is to say a deal forcing them to stop offering card games.

The post Gambling Bills Emerge in Florida but There’s No Mention of Sports Betting appeared first on Casino News Daily.