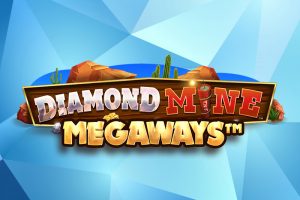 Diamond Mine Megaways, one of the most successful online slots to have been created by Blueprint Gaming and equipped with Big Time Gaming’s Megaways engine, has joined Blueprint’s Jackpot King progressive system.

Jackpot King will breathe new life into the popular game by providing players with the chance to scoop hefty wins in a single spin of the reels and additionally elevating gameplay.

Launched in 2018, Diamond Mine Megaways was Blueprint’s first Megaways slot to be released to the global online casino market. Shortly after its launch to the public, the game broke several records set by earlier titles crafted by the studios, including highest number of plays and stake per user.

Diamond Mine Megaways is a mining adventure slot that offers a six-reels setup with an extra horizontal reel at the top of the screen. Each spin offers between 2 and 7 symbols on each reel for up to 117,649 winways.

Aside from the powerful Megaways mechanic that Blueprint has licensed from BTG, the game also offers a Mystery Symbol that can show up on any reel and replace any other symbol except the scatter, a Free Spins function, and an Unlimited Win Multiplier.

Blueprint said the addition of Diamond Mine Megaways to its progressive jackpot network would broaden Jackpot King’s already massive appeal among players from different markets. The system currently comprises more than 60 titles produced by the major iGaming studio.

Commenting on this important news, Blueprint Gaming Director of Key Accounts and Marketing UK Jo Purvis said that Diamond Mine Megaways is one of their most successful titles and “will undoubtedly prove to be a valuable addition to Jackpot King.”

She went on to say that this action-packed online slot has already garnered a strong fan base and “incorporating our industry-renowned progressive jackpot functionality will amplify the excitement to new heights, knowing they could become a millionaire off any spin.”

Speaking of millionaires, a Blueprint game connected to the Jackpot King system recently created one. A PokerStars Casino player turned an €0.80 stake into an €8.1 million prize after nabbing the main pot of the studio’s progressive jackpot.

The player, who wished to remain anonymous, nabbed the hefty prize after activating the Wheel King feature on Blueprint’s Deal or No Deal Megaways title. The game was crafted in partnership with Banijay Brands and has seen great popularity among players from all over the world.

Of that recent win, Ms. Purvis said that it “epitomizes the beauty of Jackpot King and why it continues to be an integral part of an operator’s online casino offering.”