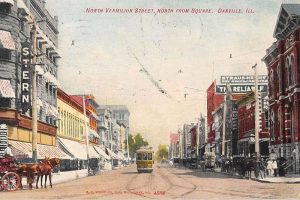 In June of 2019 Governor of Illinois J.B. Pritzker signed a gambling-expansion law, that allows the establishment of six new casinos in the state.

One of the six casinos is in Danville. The city submitted it bid in November but still has not been approved. According to Mayor Rickey Williams the biggest reasons of that being the current coronavirus pandemic.

According to the law, the state has a period of one year to approve any candidature for licenses and to provide reasons behind any rejections.

Set-backs due to Coronavirus Pandemic

Marcus Fruchter, Illinois Gaming Board Administrator confirmed in October the role of the pandemic in the application process. According to Fruchter, the virus caused some significant delays in many of the steps during the process.

He added that “COVID-19 made certain routine IGB activities — such as applicant and key person interviews, site visits, fingerprint analysis, and obtaining official tax documents and other records from state, local and federal agencies — difficult and at times impossible”.

The city of Danville submitted its application in November 23. The first bid from Haven Gaming LLC was rejected since the gaming board announced it to be incomplete.

The next bid came from a reconfigured entity called Danville Development LLC. The company’s idea is to establish casino at the site of a former warehouse. The project will be led by Wilmorite Construction, based in Rochester N.Y. The plan is for the future casino to become the largest complex on Jones Road.

Vice president of gaming development for Wilmorite, James Wilmot expressed his excitement for having the opportunity to build the casino. He added: “We’re hopeful that come spring, we’ll have some more feedback and possibly a license in place so we can get up and running.”

According to Wilmot, the construction should begin two months after the license is approved and the building process should take nine months.

Wilmot states that he is not worried about the pandemic affecting the casino industry. He is adding 10,000 square feet to the original plan to make sure that all rules implied by the current coronavirus pandemic are being followed.

According to the designs of the new casino, it will include 500 slot machines, 10 tables, a steakhouse restaurant, a food court and more than 700 parking spaces. According to Wilmorite, the expected annual income from the company will be about $66 million with about $6.2 million going to the city budget.

The city of Danville already scored a big win last year when it signed an agreement with Caesars Entertainment INC to be the city’s preferred casino operator. Mayor Williams shared his conviction that the new location will bring a lot new things that other location does not offer.